The Scottish Environment Protection Agency (SEPA) are close partners and valued supporters of Neighbourhood Watch Scotland (NWS). For a number of years NWS and SEPA have worked together to improve their community engagement processes allowing SEPA to better connect with local communities regarding flooding awareness and preparedness. 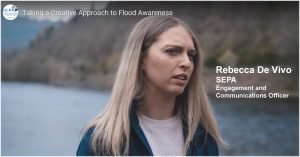 Over winter 2018-19, our colleague Rebecca De Vivo, SEPA’s Floodline Engagement and Community Engagement Officer, has worked with arts and sustainability charity, Creative Carbon Scotland (CCS) to pilot a creative engagement project in Aberdeen exploring how the arts could be used to raise levels of flood awareness and preparedness in flood risk communities.

The pilot took place in the Denburn Valley in Aberdeen where the local council has been installing a number of flood protection schemes to improve climate resilience in the city. Unlike traditional forms of public engagement, this project sought the skills and expertise of a creative practitioner to design and facilitate a number of engagement workshops on flooding and local flood risk management on behalf of SEPA.

Local musician, Simon Gall, was appointed by the project team to lead the design and delivery of the creative workshops with local community groups, including Fernielea Primary School’s P6 class.

Since the sessions, the P6 class has gone on to perform their songs at various conferences around Aberdeen and have been nominated for a Children and Young People’s Services Award in Aberdeen.

We hope this project has inspired others to adopt a similar approach for future public engagement activities, particularly with hard to reach groups.