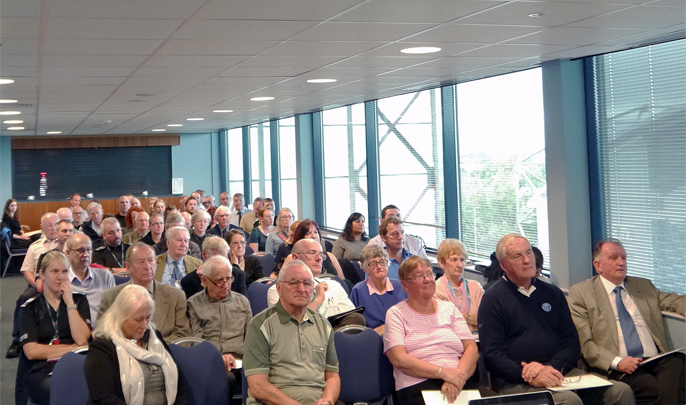 In a change to previous years the formal Annual General Meeting element was held after lunch, allowing the morning session to be dedicated to the Seminar. This year’s theme was “Connecting Communities” and aimed to show the value that neighbourhood watch can bring at national, regional and local levels and that the neighbourhood watch concept can be relevant to any community.

The order of presentations was:

Gordon Paterson spoke about a just, safe and resilient Scotland in the context of their Justice Strategy and ‘The Scottish Approach’.

Chief Inspector Megaughin covered the tremendous challenges, and opportunities, in transforming policing in Scotland over the next 10 years. He explained the basis of Police Scotland’s 2026 Vision and that the creation of a single Police Force and Authority was only the beginning of that transformation – not the end. Key to their 2026 Vision are Protection, Prevention and Communities. He highlighted that all public bodies must now find new and innovative ways to delivering their services.

The final presentation of the morning was from Norrie Brown who has been a driving force behind the Beith Orr Park Neighbourhood Watch for 10 years. Like so many NW groups Beith Orr Park was borne out of need, due to the impact of anti-social behaviour and an apparent lack of engagement by police and local authority. Norrie, along with a few other community activists decided to do something about it. In the process Beith established 8 different NW groups, many of which have now amalgamated. They met every two months and in the summer and at the festive period had other community events. Through a co-ordinated approach and some determination they were able to identify and evidence the key issues afflicting the local community and this coupled with their persistence won over the local police and local authority, who have become willing and valued partners. Having reduced the impact of anti-social behaviour the groups have since improved local community information provision, organised concerts and events to improve to bring different generations and sections of the community together.

The formal Annual General Meeting 2017 saw the retirement and re-election of Fiona Stuart, who represents Horse Watch Scotland. Fiona is a formal member of Neighbourhood Watch.

Also retiring in 2017 was Duncan Littlefair, who, due to a change in personal circumstances had to relinquish his member Trustee position on the Board. Due to the invaluable knowledge Duncan brings to the organisation is terms of charitable activity, governance and human relations the Board of Trustees have since elected Duncan as a co-opted Board member.

For 2017 -2018 Alan Dobie remains as the Chair and James Watson as the Treasurer.

As has been previously reported the Board of Neighbourhood Watch Scotland is under development and it is likely that new faces will appear over the next year, bringing with them news skills, knowledge and opportunity for neighbourhood watch.

Another major change for 2017 was the engagement of Anne Knox from SVE (Stirling Voluntary Enterprises) as the Independent Examiner of the Final Accounts. Anne has brought improved clarity to how neighbourhood Watch Scotland manage and prepare their charity accounts. During the AGM she provided a clear, concise and valued explanation of the process and content of the Final Accounts. This was well received by members. SVE have been engaged as independent examiners for 2017-2018.

Overall the day was agreed a success and provides another stepping stone in the development of neighbourhood watch in Scotland.