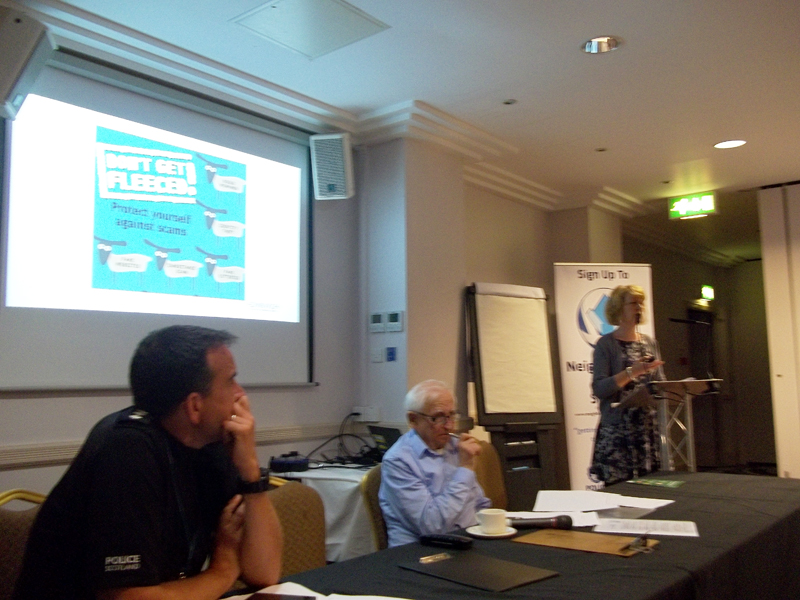 The theme of the event was, ”It’s your Community, your Safety, your Watch, your Way!” and members of the public from the North West Edinburgh area were invited to come along to obtain advice from community safety professionals, raise their concerns and join or set up a local Neighbourhood Watch.

The main supporters of the event were Neighbourhood Watch Scotland and Police Scotland.

A question panel, facilitated by Bert Scott, later answered questions on whether Edinburgh City Council had their own Water Safety Strategy, instances of anti-social behaviour, No Cold Calling Zones, why some people (23%) still do not feel safe when out and about in their communities at night, reduced opening of Police Office public counters and impact of funding cuts on Community Policing resources. Scottish Fire & Rescue Service and Corstorphine Emergency Response where also at hand to discuss community based defibrillators.

The event was also supported by Nationwide Building Society.

In closing Alex Cole-Hamilton MSP highlighted the value of community engagement and networking through these type of events. He recognised and valued the contribution made through community collective approaches such as Community Councils and Neighbourhood Watch and their ability to work alongside public services. He thanked everyone for their attendance.

After the formalities attendees were able to ask questions of the individual organisations and take away materials covering most of the evening’s subjects.

Almond Community Safety Panel’s Percy Feketey chaired the evening and was delighted with the overall event, only wishing more people had attended and benefited from the presentations and discussions.

Any cookies that may not be particularly necessary for the website to function and is used specifically to collect user personal data via analytics, ads, other embedded contents are termed as non-necessary cookies. It is mandatory to procure user consent prior to running these cookies on your website.