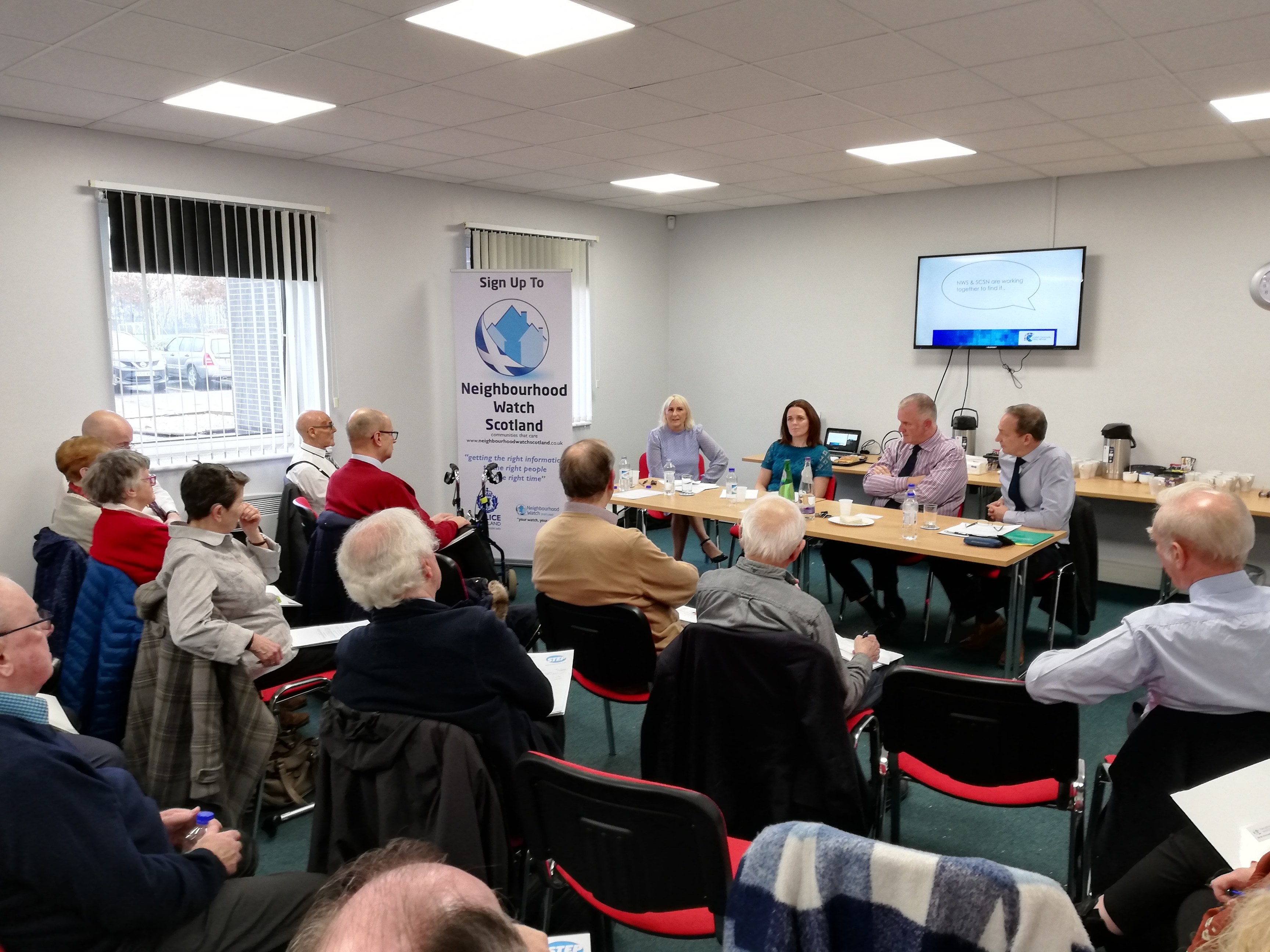 Although the weather was less than kind Neighbourhood Watch Scotland held their 2018 Annual General Meeting on 14th November in Stirling.

This year’s AGM was somewhat later than previous years and much more focussed on Neighbourhood Watch Scotland and its key partners. In total 22 people were in attendance.

In the run up to the AGM Neighbourhood Watch Scotland had underwent some earlier than planned change with the retirement of Liz Campbell, our Administrative Assistant and the resignation of Bill Kelly from the Board of Trustee’s. Whilst this was a loss for the organisation it was balanced with the addition of Varrie Mcdevitt to the team and new and exciting opportunities for partnership working.

The morning session attended to the business of the AGM where Alan Dobie, Chair provided his remarks on ‘Neighbourhood Watch Scotland’s most successful year to date’. The Annual Accounts prepared by Anne Knox of Stirling Voluntary Enterprise were accepted, with the Manager Brian Connel providing an overview of the income and expenditure. Sadly Alan Dobie explained that as planned he would be standing down as Chair after the AGM and from the Board at the end of the year. In doing so he felt he was leaving Neighbourhood Watch Scotland in a very healthy state, was immensely proud of what the organisation had achieved over recent years and his departure would allow opportunities for new energy and ideas.

After an enjoyable lunch and some networking presentations were provided by Elinor Findlay from the Building Safer Communities Unit, Scottish Government where she outlined the recent review of national outcomes, particularly those supporting a reduction of harm to communities. This set an appropriate backdrop for Lorraine Gillies, Lead Officer of the Scottish Community Safety Network who explained the role of her organisation in creating a forum and voice for community safety professionals across Scotland and the unique opportunity to work closely with Neighbourhood Watch Scotland. She explained the challenges of bringing two organisations together within a truly meaningful partnership but countered this with the considerable rewards and benefits in doing so.

The last presentation was given by our Community Engagement Officer, Willie Clark and Mark Armstrong, the recently retired Co-ordinator of Safer Communities training at the Scottish Police College.  Both spoke passionately about the need for effective community engagement and the realities of today’s Community Safety environment where key services and the opportunities for direct community engagement are being diluted. However, Willie was able to provide examples of where Neighbourhood Watch Scotland had made a difference to communities and individuals through their direct, empathetic and professional engagement. This presentation complimented the proceeding ones from Elinor and Lorraine and reinforced the day’s theme of “Partnerships – Better Together”.

The closing session introduced members, partners and the Board to a Neighbourhood Watch Scotland survey about to be undertaken using the Neighbourhood ALERT messaging system.

Neighbourhood Watch Scotland looks forward with excitement to 2019, a ‘Year of Opportunities’.