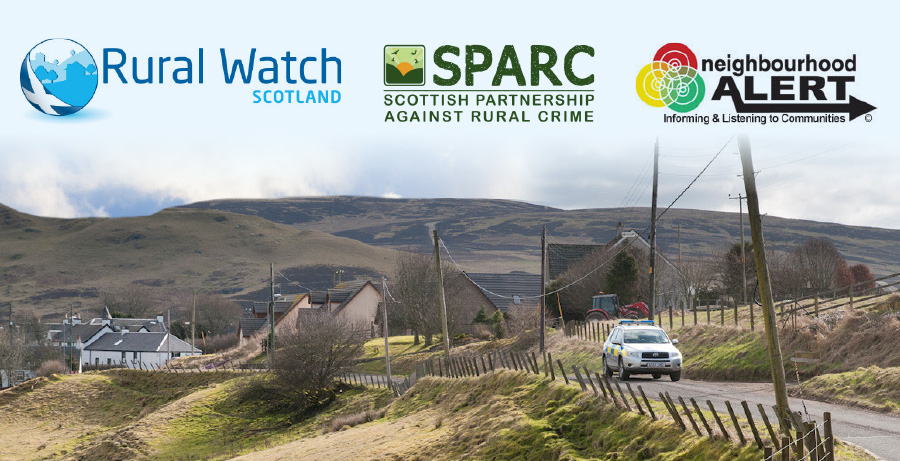 Following concerns nationally regarding the cost and increased incidents of rural crime and the setting up of the Scottish Partnership Against Rural Crime Forum (known as SPARC) it was decided that the Neighbourhood ALERT system used by Neighbourhood Watch Scotland was best suited as the communication tool of choice for a Rural Watch Scotland.
Rural Watch Scotland website www.ruralwatchscotland.co.uk was launched in December 2016. The mini-site carries the key messages of the SPARC Group in terms of crime reduction within rural environments and links to partner websites and related information.

Training is currently being rolled out by Neighbourhood Watch Scotland staff to Police Officers within all the Scottish Police Divisions.

Aberdeenshire, Lanarkshire, Forth Valley and the national Safer Communities Team based at Gartcosh Crime Campus have been trained to send out ALERTS to registered members, with West Dunbartonshire/Argyll & Bute, Arbroath and Lothian areas next on the programme.

Interest in the programme has also been directly received from Safer Community Police Officers in Ayrshire, Oban, Tayside, Mid Lothian and the Borders.
ALERT Cards have been designed and printed for both Rural Watch Scotland and Neighbourhood Watch Scotland to encourage sign up to the relevant sites and shared database.
Whilst Police areas in Scotland have maintained various forms of engagement with their communities for many years they see the benefits of using the shared Rural Watch Scotland platform to have consistent engagement with the communities they serve and allow trained local officers to access the Neighbourhood ALERT system and send local relevant information out to those registered on the Neighbourhood ALERT database ensuring that ” the right people receive the right information at the right time “.