This is the first strategy about preventing and tackling rural crime in Scotland. 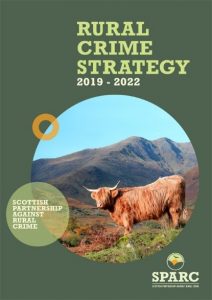 Scotland is home to a current population of 5.4 million people, 20% of whom live in rural communities, has a land mass of 30,420 square miles, 787 islands (of which 130 are inhabited), a coastline including those islands that stretches over 10,250 miles, two designated national parks, (Loch Lomond and The Trossachs and The Cairngorms), more than 1,400 sites of special scientific interest (SSSI), six UNESCO World Heritage sites plus several thousand cultural and historic sites.

Rural Scotland is integral to the success of our nation. This is due to our tremendous natural assets renowned worldwide – coasts, landscape, rivers, seas and wildlife – all of which deliver vital produce and services. Scotland’s rural assets significantly contribute an annual revenue to the economy whether directly or indirectly; for example tourism more than £11 billion, Scotch whisky more than £5 billion and agricultural output worth around £2.9 billion.

SPARC recognises that rural communities and the natural environment contribute greatly to Scotland’s reputation but are not immune from those who pursue criminal activities. We need to tackle rural crime in all its forms plus target any criminality including those Serious Organised Crime Groups (SOCGs) who want to make money at the expense of hard working, law abiding people, thus threatening the very fabric of rural communities.

Whilst the volume of crime in rural communities and environments is often lower than in urban locations, the consequences and impact of an incident or crime committed often has a much deeper and far reaching impact, both on the victim and community as a whole. The Rural Crime Strategy 2019 – 2022 outlines how everyone can work in partnership to tackle rural crime throughout Scotland.

You can access the full Rural Crime Strategy document below: